By diverting a stream to flood the area, we manage to disarray the forces of the Empire and save Parakel. The legendary summoner Aldenarra joins, although his power is only half-awakened. He does suggest that Shifil ride on Rikid, and he's now a dragon rider. Now on the suggestion of the king of Parakel we head north to a village that supposedly has a remnant of Sarena's people -- if they tried to use her Dance of Destruction for their own ends, they'll surely try to go after the village.

Unfortunately we're too late -- the Empire has already destroyed all of Sarena's people, leaving only the spirit Shunare behind. After clearing away the Imperial troops, a voice calls out to Sarena and the party is drawn into a tree. 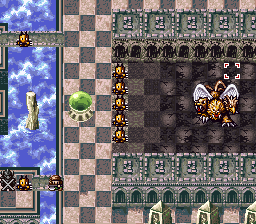 Sarena dances the Dance of Destruction to defeat the Chimera. Linus tells her that the dance is capable of destroying the entire world and restarting from the beginning, and that their people is charged with using it when the world becomes unbalanced between dark and light. As he dies he tells Sarena to use the dance wisely. The group sets out for the Empire.

This stage has a bunch of elephant riders, and Barnasus again. He tries to run away when he gets attacked, but the whole party makes fun of him and he decides to stay and fight. 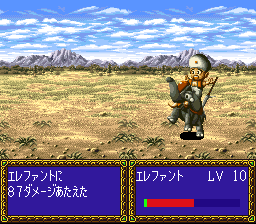 Riad and company arrive at Lowdos Island to try to get support for their fight, even though Lowdos is currently having a civil war. Weiss the sharkman shows up to have the final showdown with Riad. Even though Riad was too weak for me to face him, the game still acts like Riad was the one who killed him.

We use a tunnel to enter the Empire secretly. Unfortunately Gibegora, who is the advisor to the Emperor, knew we were coming and placed Ark (controlled by magic) to fight us. But we beat him and turn him back to normal. He frees all his companions and goes back to Farselia while we continue on.

The final showdown with Zoldin, who fights us because he's an Imperial general. But when defeated, he gives the Breakstone to Riad and tells us to beware of Gibegora.

This stage is the worst example of the too-large battlefields that this series is plagued with; it took me over 20 minutes just to move up to where the fights could start, and that's with speeding through the enemy turns.

A dragon guards the gate to the palace, the same one that killed Rikid's mother. But he's easy. This is the last stage with shops so I spent all my money on stat up items. Once we beat the dragon, a huge force shows up, but fortunately Ark and the various kingdoms we've passed through show up with reinforcements to deal with them, so we can move on to the palace. 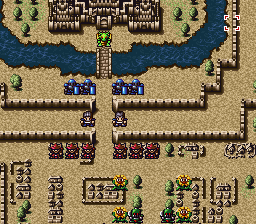 Riad's older brother, the Crown Prince, is lying in wait, although he's suffering from some kind of illness. After beating the enemies, he tries to take on Riad, but Sarkrus (a winged woman on our team) intervenes and dies separating them. It turns out she was a spy for the Empire, because she loved Riad's brother. Riad's brother stops fighting and tells them to save the Emperor their father, and the only way is to kill him. Ever since the Queen died, he has longed for a world without war, and this allowed Gibegora to use some kind of magic to influence him. He won't listen to anyone else any longer. Zoldin tried to find out who Gibegora really is but they never could.

Riad arrives at the throne room, where his father and Gibegora are. Gibegora leaves, and the Emperor turns into a demon. Riad tells him that his brother is dead, but the Emperor says he no longer needs an heir because he's immortal. He asks Riad to join him anyway, but he refuses. Once you kill the Emperor, he comes back to his senses and asks Riad to guide the kingdom in the right way, the way his mother would have wanted.

We continue through the palace. At the end of the stage, the summoner Aldennara tells us that Gibegora and he are the same race; they're the final beings created by the gods, with some of the power of the gods themselves. But Gibegora has become drunk on his own power so Aledennara was sent to destroy him. Since his power still isn't fully back, that's up to us instead. 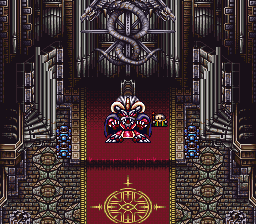 Gibegora absorbs the party into his body(!?). Aldennara is not there, and tells us to take out the heart in order to defeat him. We succeed, and Sarena dances the Destruction to defeat him (since it's in a separate universe, like the dream world from earlier, it doesn't destroy the real world). Riad becomes king with Sarena as his queen, and everyone else returns to their lives. 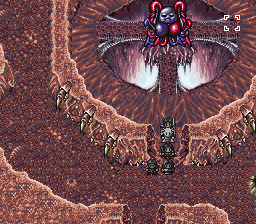 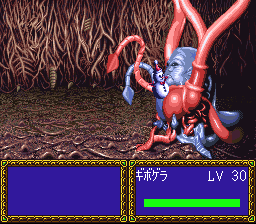 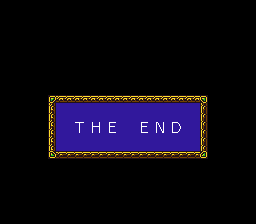 My review: Do not play this game unless you like having a useless main character and spending over half your time in the game just moving each unit one by one up to where the battles are. Just don't play it. Don't waste your time, it's too valuable!