This game is a followup to an earlier Game Gear game called Crystal Warriors, which did not qualify as a SRPG under my definition. As is typical of the handheld games at this time, it has a simple system and a short story. The graphics are impressive for this era of handheld. 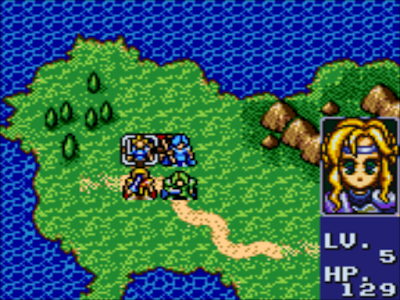 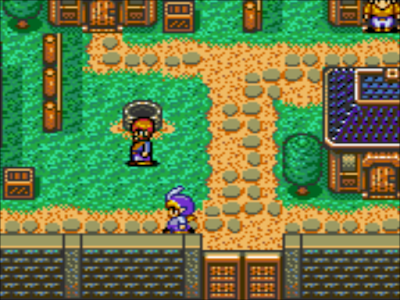 It must have continually frustrated Sega, Atari, and other companies that they could release handheld systems that were way ahead of the Game Boy from a technical standpoint. But they were never able to make them affordable enough, and get enough third party support, to make a serious challenge to Nintendo's system.
The basic gameplay of Royal Stone is familiar SRPG territory at this point. You have 8 characters on a grid map, and you take turns with the enemy moving. The innovation in this game is that in combat, each side gets two turns. On your turn you can attack, run away, or either defend or use a special attack (depending on the unit). 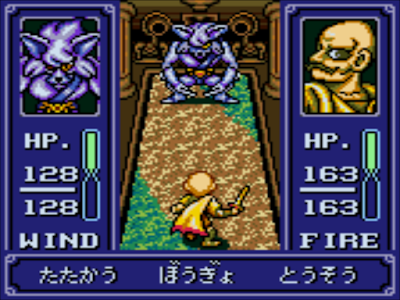 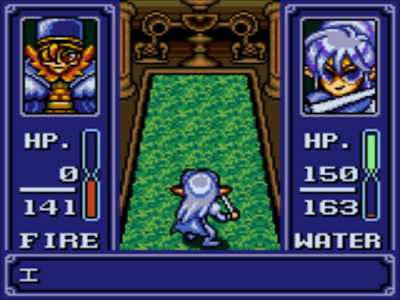 Each unit has an element, and there's a Fire Emblem-like triangle. Water beats Fire, Fire beats Wind, and Wind beats Water. Earth is the fourth element; human units have Earth and they have no particular affinity or weakness to any other element. This elemental affinity is a simple system and makes it pretty obvious who you should use or attack with in any specific scenario, but it adds a minimum of strategy to the game. Also you can't see what the monsters' stats are when you start the stage -- you have to use the Scan power or attack them to find out. I appreciate what they were trying to do here, but the Scan power has such a long range that mostly this just adds tedium rather than strategy to the game.
The game is not very difficult until you get to the last couple of stages -- even those stages aren't horrendously difficult, but you do start encountering bosses that can kill your characters in one attack sequence, which means you have to strategically move and possibly even sacrifice some units to defeat them.
Your units consist of a few story characters, and then other characters that you can recruit from inns or sometimes automatically get. There are regular units and then also monster units that seem to need more XP to advance but maybe are a little more powerful? It's hard to tell. 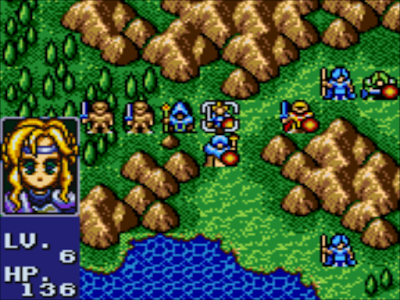 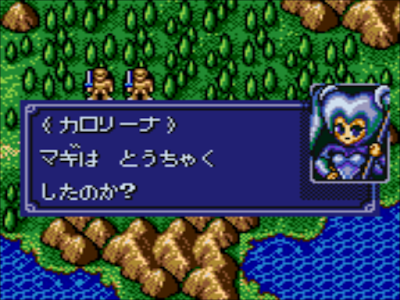 The story has an interesting start. The main character, Ifa, begins the game accused of treason, for killing her commanding officer and causing the rest of her squad to die. She is tied to a stake and cast into the sea, but saved by a divine cherub-like being called Kokotto (who becomes the character you control in towns). As the game progresses, you learn what happened, and fight a war against the Empire to figure out the secret of the Royal Stone. The resolution of everything tends towards the cliche but it's reasonably entertaining.
Between battles you walk around small towns, gathering information, buying new equipment and spells, and sometimes recruiting new characters. I never had a shortage of money.
Overall this is a decent handheld game. The handheld games from this period are always at a disadvantage evaluating them in 2020. At the time, the main feature of a game like this was that you could play it on the go (or at least in a place in your house that doesn't have a TV). Nowadays this feature is no longer meaningful, and most people are going to be playing it on a setup that can also handle any number of other consoles.
Next up is another handheld game -- Another Bible for Game Boy. It has some Super Game Boy enhancements. I highly recommend the article Fuck the Super Game Boy, which explains a lot of the features of the SGB and how games used and didn't use them. I'll talk some in the next post about how Another Bible uses the SGB.