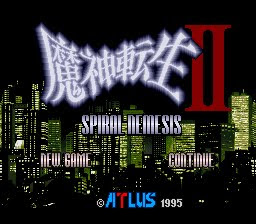 This is Atlus' second attempt at a strategy RPG based on the Megami Tensei franchise. As with the other games in the series, the highlight of the game is the ability to recruit monsters to your side and fuse them to make different (hopefully stronger) monsters. It also features the alignment system from the other games.

The major differences from the first game are:
One big problem that many Japanese players complain about is how long the enemy turns take, particularly the "thinking" time. I've seen Japanese players saying they would read books or clean their house on the enemy turns, which at some points in the game can take over 10 minutes for a single turn. This is definitely a game you want to play on an emulator with a speedup key.

The game is divided into six "scenes" (although the game itself doesn't seem to recognize them; it's six separate overworld maps). I'll cover the first two in this post.

The backstory for the game is that someone has used demons and monsters to suddenly take over Tokyo. In response, people have formed a resistance group called Partizan. The main character Naoki joins Partizan and meets Tomoharu and Kaoru. Their first task is to free Shibuya. 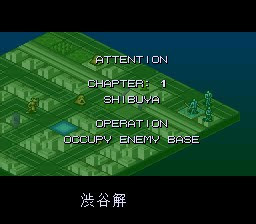 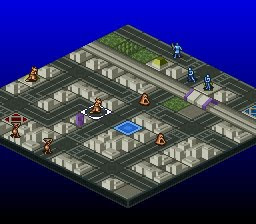 The goal is to reach the red square on the left. Right now we cannot summon or talk to the demons yet, so we just have to kill everything. I used this chance to move the main character up levels. As usual in the MT series, you can't talk to a demon that is higher level than you. Because of this, you don't want to spread out the XP too much among your human characters. 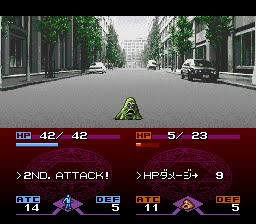 By the way, the place immediately below the main characters is a train line. These are constant annoyances in the game, reducing your movement rate to near zero unless you cross at the station (where you still need to go slowly).

Initially I was dividing points between Strength, Vitality, and Speed. But I realized that Speed is much more important than Strength because you can get a second attack. So eventually I was putting most of the points into speed.

We learn that Naoki's parents are scientists, but the same day that all the demons came into Tokyo, there was an accident at the lab that blew it up, apparently killing both his parents..although he thinks they might have survived.

Next up is Meguro, where we get into a research lab. 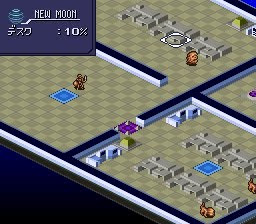 In the lab, Naoki meets a mysterious woman named Karen who seems to know who he is, and gives him something important. They then head back to the Partizan HQ. It's been attacked, and Ogiwara, who is the leader of the enemies, has appeared himself. Naoki is able to get away, but the rest of the companions are left behind.


He ends up in Ikebukuro, where he meets Aya, and also figures out that Karen gave him a computer called DIO. Now we can recruit monsters. As I said above, it's much easier to recruit monsters in this game than in MT1. Although at least at the moment we can't recruit Light or Dark enemies, just Neutral. (Light and Dark enemies can still be fused, just not recruited.) Now there's a "world" map. 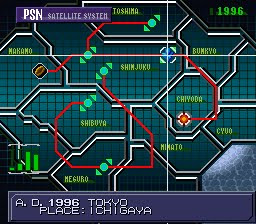 The green dots are places I've cleared, and the coin is a shop. The shop interface is inexcusable! You can't see what the power of weapons/armor are, or who can equip them. This is 1995! We're not in the NES era anymore; designers really need to be taking responsibility for making a usable interface.

Anyway, the goal is to get to the enemy HQ over at the right. Once there, Ogiwara is gone, and we easily free Tokyo from the demons. But a mysterious machine in the base transports them somewhere. It seems to be Ueno, but it turns out to be Ueno from thirty years in the future. 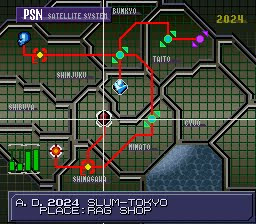 Scene 2 introduces two types of places -- the Remix shop on the left, where you can combine monsters in an easier to use interface than doing it on the battle screen. The purple area on the right can be repeated and lets you recruit monsters you might want. You can't win the battle so the only way to get out of it is to use a smoke bomb or Escape (which loses money). I did need a Pixie for an optional event in Scene 3. 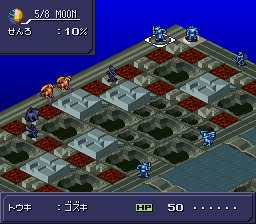 Tokyo in 2040 is a ruin, and there are a lot of damage areas. I continued to recruit new monsters in this area as well as get better equipment for them, and focus the XP on Naoki. Eventually Tomoharu and Kaoru rejoined, and both Kaoru and Aya develop magical ability so they can start using spells.

At the end of this scene, Karen appears again and reveals more of the back story that involves time travel and such -- since this game has a translation I won't give away too much in the first post. My goal usually for the first post is to introduce the gameplay and give some intro for the story, but the rest of the posts may have spoilers. I'm going to take more detailed notes for Scene 3 and beyond, but this is where I will stop for now.
at March 29, 2020 4 comments: 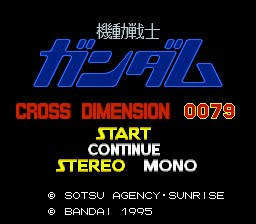 This game is on the borderline of SRPG status; I didn't find it on my first passthrough but I added it later. It has a translation patch and a good walkthrough; I'm just going to give a general review of it -- I played about 10 stages but it's not really my cup of tea. The game is divided into two parts: the first 14 stages are the story of First Gundam (0079), and the last 6 are a new side story taking place immediately after the end of FG with new characters. This little side story later shows up again in the SD Gundam G Generation series. 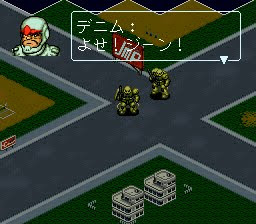 After an initial cutscene, you control Amuro in an easy fight against the two hapless Zaku units. 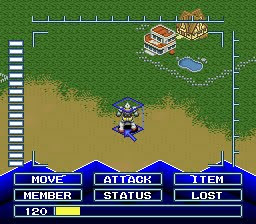 The 120 there is the Gundam's power; this goes down from moving and also from getting hit. "Member" lets you see the maps and choose other units, and "Lost" sends you back to the beginning of the map with your XP gains preserved. However, that's also what happens when you get a game over so there's not much purpose to that since you might as well fight and gain some XP. 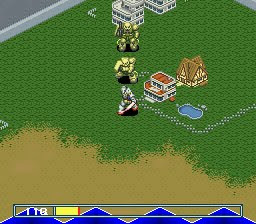 You can either attack with ranged weapons, or close in and fight. Once you close in, the fight continues (with the two trading blows) until you either kill the enemy, or disengage from the fight with the B button. This gives the enemy a free attack, though. 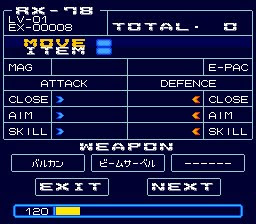 Between stages, or when you level up, you can assign "prime points". You can freely assign them on this screen, even ones you've already assigned before. This is also where you give the units items that restore energy or special weapon power. The ability to refill your items when you level up is an essential part of the game. Part of the issue I had with the game is that after the first few levels, the stages are impossible to finish without a lot of energy refills. 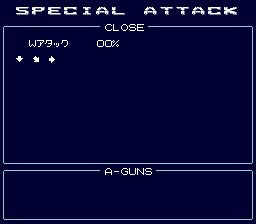 You also have these fighting-game style special attacks. As you use them, the percentage increases and when it hits 100% you can use them as your initial attack to start a fight. 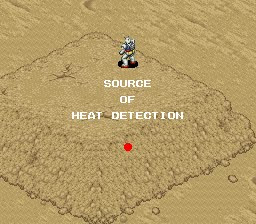 Because of the Minovsky Craft particles, you can only see a little bit of the area around you, and have to rely on this "heat detection" to find out where the enemies are. 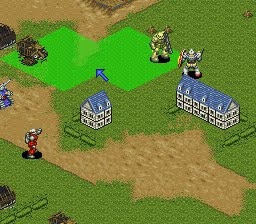 After a few stages you get the Guntank and the Guncannon, which have ranged attacks that can hit multiple enemies. They're not well balanced, though. The turn system is strange -- you move one of your units, then the enemy moves, and then you can move any unit you want again. This means that most of the time you just want to use the Gundam, and trying to move the other units up levels is a tedious process that requires using your Gundam as a damage tank while the other units pick at the enemies. If the enemies close in on the tank or cannon they're helpless. This is another problem I had with the game. 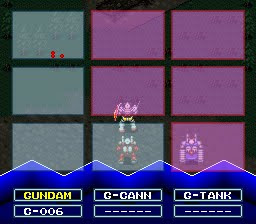 The last stage I played was vs. Char and Lalah. First,  you have to chase Char all over the maps -- this happens in a number of stages, but it's especially annoying in this one. Once you attack Char once, he flees to a different map. If you miss too many times, or have too much trouble finding him, you run out of energy and can't deal with the second part of the map where you have to fight Lalah and her Elmeth with the bits. Some of the bits require ranged weapons to beat, so you have to keep some weapon refills. I kept losing on this stage either because I missed Char too much or couldn't find him, and I just got tired of it.

Maybe there are aspects of this game I didn't appreciate, but I think it only technically qualifies as an SRPG under my definition; it doesn't really feel like one. There is a translation patch, though, so try it out if you want to see for yourself.