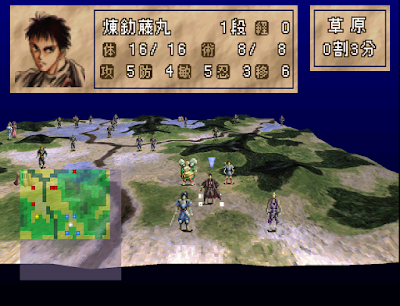 Another Playstation game. This time I am using the Duckstation emulator, which allows for higher "internal resolution". What this means is that the assets on the disc get displayed at a higher resolution than the original hardware allowed for -- as I understand it, this is not the same as upscaling. It's more like avoiding the downscaling that happened on original hardware. It does make a difference, especially in the sharpness of the text and character illustrations. 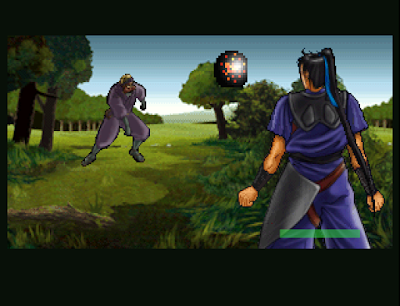 Despite the name, this game seems to have no science fiction or cyberpunk elements at all, at least not on the surface. It's based on legendary material about ninjas in the Sengoku period (pretty much anything you see about ninja in video games or anime is based on Edo and Meiji period pop culture and has no historical basis). According to the story, Takeda Shingen was raising a group of people in a hidden village to become super ninja. This includes the main character Fujimaru, who is a typical shonen manga hero -- rude and brash.
The game is considered a kusoge by Japanese players and I see why -- I don't find it unplayably terrible, but it sabotages its own systems with poor design decisions.

The system is a pretty standard one. You move around on a map and use attacks -- each character has special abilities they can learn which are range 1, 2, or the whole visible map(!). Each character has a weapon and 4 items; the items include armor and other stat increases. Each enemy has certain resistances and weaknesses, but there's no way to find out what they are, and the instructions don't even tell you these exist (for instance, some enemies have high defense vs. sword attacks).

One of the major features of this game is that between maps, you spend time in the hidden village. Each character can take one action per 2 hour period you're there. They include developing new weapons and items, earning money, raising stats, and learning new abilities or magics. This is an interesting system because you have a very large party and it gives you something to do with your non-fighting characters. However, there are some bad design decisions that make this more annoying than it should be.

First, the game gives absolutely no information about how this process actually works. You can take an action to develop new medicines. But what does that mean? Is it a percentage chance? Are you building up points? Is there a difference between 3 people doing it twice each and one person doing it 6 times? Does it depend on the character's stat? This is true for every ability, so that you really have very little clue about what the village actions you're taking actually do. The results screen is also confusing and makes it hard to tell what you actually got.

The second problem is that the system encourages you to distinguish between fighting units and non-fighting units, so that you can have your non-fighting people earn money and research items. But then you need specific characters to get the "true ending", and in stage 8 you suddenly have a forced party of 4 characters + 1 of your choice. (The "true ending", incidentally, is impossible to get without a guide.) 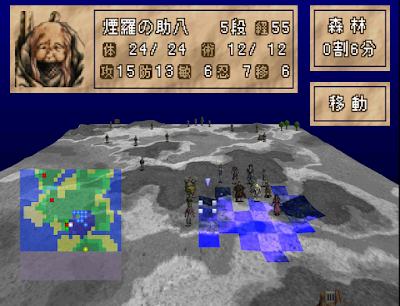 You may be able to see from that picture, but the main map is extremely hard to interpret. If they didn't have that inset map down at the bottom left I think this game would be almost unplayable. There's also an annoyance with the controller where the input is way too sensitive and you often find yourself not able to select where you want. I thought this might be an emulation issue but I saw it listed as a major complaint of original players as well.

In the first stage, they come out of the hidden village because some bandits have appeared nearby. Also, there are women who are being attacked by them. Fujimaru doesn't really care about the women, he just wants to beat the bandits. However, if you talk to them during the battle they'll join, and most of them have healing spells so the stage as a whole is pretty easy. I didn't bother trying to beat all the enemies. I think you would have to take some units around to the top right to do that, but it's only a few extra.

The women turn out to be kunoichi (female ninja) trained by Mochizuki Chiyome, another probably legendary figure. They've come to let us know that Takeda Shingen is dead, and that we are now free. The women are also free because Chiyome has died too, and they decide to live in the hidden village with us. The narration informs us that we're free, but now have no idea what to do, and will be the target of other ninja who don't like the idea of masterless ninja running around. 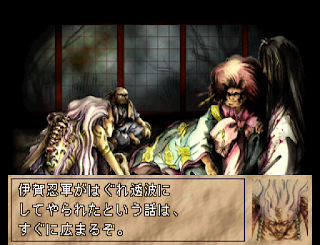 Here we get a ninja named Kato Danzo coming out with a group to try to defeat our party. He runs when defeated. I just took my characters around to the left.

This time in the village sequence I did actually develop some new medicines and items, and people learned skills. 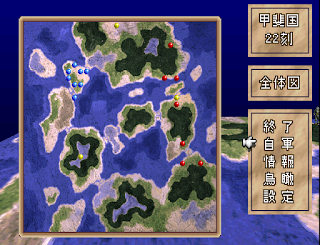 The Iga Ninja are coming after us. This time the 3 leaders decide not to fight us, so it's all grunts. I took my guys around in a spiral through the left. After we win, word starts to spread that we beat the Iga clan, which is not great for us.

Kaname can recruit one of the grunts in this mission (at the top right) by standing in front of him (down from him on the map). 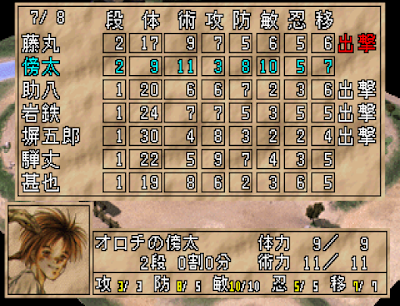 The next three stages are a sequence so you can't switch characters. Annoyingly, there's a specific character you have to send out in this stage so that she'll be out in the next stage. Then she can get an item which will unlock a secret stage after stage 22, a necessity for getting the true ending. This is all without any hints at all. The obscurity of this was a complaint about the game when it came out, and I'm going to make a post after I finish listing all the secrets in case anyone wants to play later. (This is far from the worst game design decision, though)

This stage we're up against a bunch of wolves. When we beat the leader, it turns out he was a ninja trained wolf that was set free and fell in with this pack. If you choose to spare his life he joins with his dog girlfriend. You apparently get different characters if you kill him. 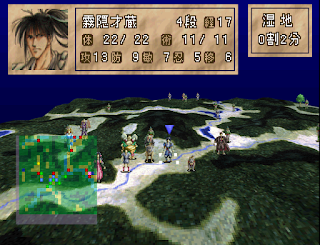 More Iga ninja battles. This stage has an oddity where you take a guy we recruited in the last battle and move him in front of every enemy until we find his sister. For some reason his sister has been turned into a ninja or something, and begs us to kill her. If you do, you get a memento. 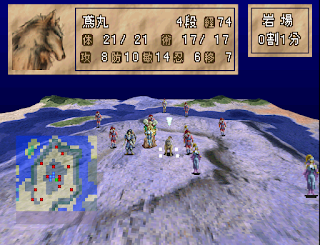 Yet more Iga ninja. One of the bosses has a really annoying attack that hits everyone on the board, including the weak dog girlfriend who kept dying from full HP. Finally I managed to not have him use it (I'm not entirely sure how) and I did win. 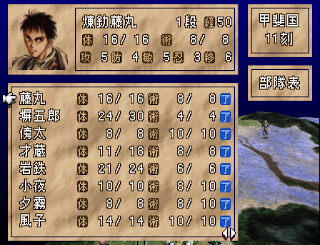 This is annoying. Fujimaru decides we need to go after the Iga clan, and you're required to take everyone but 5 people out. The remaining 5 people then have to defend the hidden against another ninja tribe that comes to attack. I tried this a number of times and was unable to beat it, so I used a cheap trick -- I left just one person behind, Gokuraku (who has the highest movement). I just moved him away from the enemies as fast as possible and waited until turn 11 when the stage ends.

I wouldn't say this game is terrible, but it's not great. I hope it doesn't take me too long to finish but I still have 18 stages left, and the game is not easy.