Sorry for the brevity of this post. I had longer writeups, but blogger managed to delete my 13-19 sections so I'm going to recreate those in a sentence or two.

We're trying to find and protect the Holy Beast (who then joins the team) -- I made the mistake of not getting up to him fast enough and he died, but then I was able to get healers up there to save him. 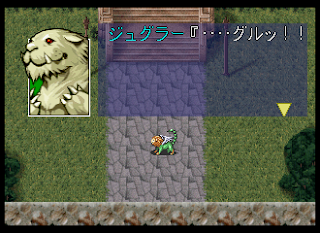 Not too bad; Dios has to be protected but he's pretty hardy. 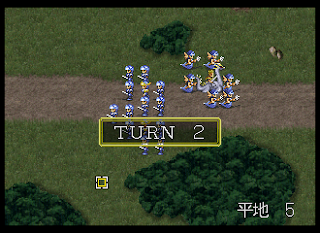 The "find Langrisser" stage. The enemies weren't very hard and I only lost one treasure to escaping thieves. 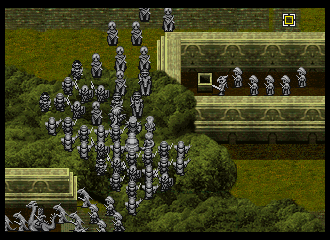 There are a ton of enemies in the stage but I didn't have much trouble with them.

I was not able to attack all 4 city gates at once so I just did three of them, and then moved all my guys up to where Freya was. 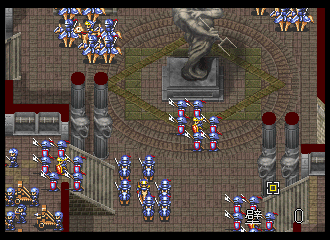 This has a robot machine but it can only shoot straight down. You do have to be careful because it's hard to get the troops not to be in front of the blast range, but if you take the long way around and go after Boltz first it's not too bad. 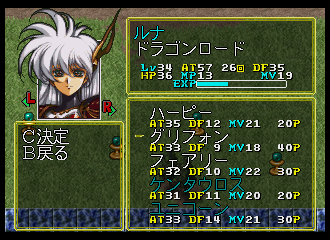 Boltz is slowly fleeing. I was able to surround him by the time he reached the first stairs and then take him out.

This was a very hard stage -- the enemies have a sudden level boost. I first tried to split my party up and go across the planks but this didn't work. Then I tried going just on the bottom two, but I was still getting torn apart by the spellcasters. What I ended up having to do was staying on my ship and letting the enemies come to me, defeating them, and then going across mostly on the bottom. I had to kill all the enemies below to allow the healers to come up as well, and then with enough healing I was able surround and take out the boss. 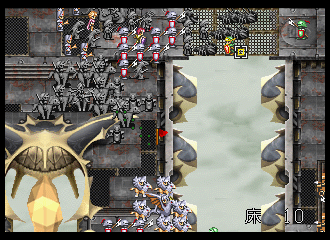 In general it's easier when everyone is in one place; it makes it chaotic and hard to see what's going on, but the heal and damage spells are much more effective (so it's maybe not so good if you're getting hit with a lot of enemy fire). There are a ton of horses in this stage so I changed everyone over to pikemen who could do it. I stayed in my starting location, moving to the center and using the horizontal and vertical formations with the pikemen to deal with all the horses. In about 10 turns everyone was dead, leaving just the two ballista and summoners. For those I just split my team into two and took them out. 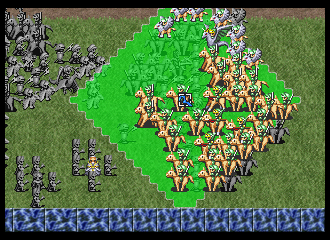 The GF walkthrough says on turn 8 monsters come out, but I think they come out when you cross the bridge, not after some turns. I stayed at the starting location and waited for the initial force to come. Then I headed north. The monsters appear, and Emerlink and one horse group stay behind to cover the retreat of the other forces. I killed them with a pike group and some support, and blasted the big monster group with spells to soften them up and killed them. This leaves one annoying dragon at the top left who moves about one pixel per turn; I had to take my whole force up there just to deal with him.

This map is deceptive. If you try to save all the villagers it seems very difficult and I think you would need some superpowered Luna to do it. If you're content to let most of them die the stage isn't hard, but you do need to be prepared. Most of the monsters (including the reinforcements) will prioritize the civilians over your characters, so you need to be strategic to block them and not move too slowly. I came close to losing but I did manage to protect the villagers in the end. 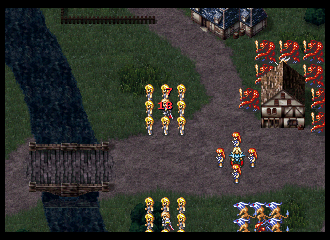 This stage starts out with you vs. Empire but soon switches to monsters. I hate the golem enemies; I should use Attack+1 more aggressively when I fight them. It took a long time but eventually I was able to kill them.

Now I need to decide if I want to continue playing this or not. I feel like I'm not really enjoying it that much and I want to finish it as fast as I can, but it's so difficult that I'm struggling with every stage which means that it will take another week or two to finish. I think that if this game did not have the Langrisser name on it I would have already given up and moved on, so maybe that's a sign I should stop playing.

My biggest complaint about the game is that it's just too chaotic. There are so many enemies on the map that you can never quite tell where your armies are going to end up. Sometimes you move and you'll find that one of your guys randomly gets pushed out to the far left of the group and now you're suddenly in range of the tough enemy who can attack your entire force.

The magic spells are also devastating; I get locked in a cycle of fast enemies casting huge area effect spells that lower the effectiveness of my guys, I can't beat anyone, then they heal, and finally my attacks come late in the phase (and the heals) so I basically make no progress in the turn.