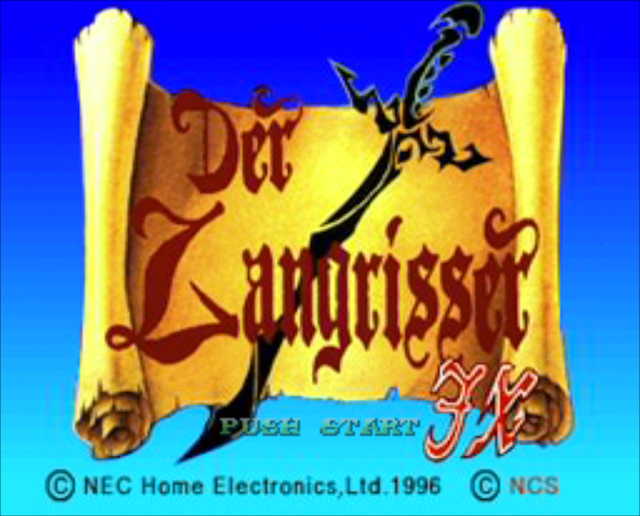 (Game 54 should be Dragon Force but I'm having a lot of trouble figuring out how to play the game, and it's a pretty stressful time at the end of semester for me, so I'm going to switch the order and do DF next.)

This game is for the ill-fated PC-FX, NEC and Hudson's attempt at a follow up to the popular PC Engine. They evidently started developing it in 1992, and by the time it was actually released it was woefully inferior to the Playstation and Saturn. It seems like its only advantage was that the console was designed to be good at playing full motion video, and it was designed to be upgradeable. But it cost $100 more than the Playstation (and within 6 months it was $200 more expensive). Ultimately only 62 games came out for the system, and though NEC tried some things to save the system they weren't able to.

Der Langrisser FX is the only game I know I will be playing for this system -- there are two more potential entries but neither one may turn out to qualify as an SRPG.

Of course, this is a remake of Der Langrisser for the Super Famicom, which itself was an expanded remake of Langrisser II. Der Langrisser changed a lot of things, but the most notable is the addition of multiple scenarios. The original story of L2 is now the "light" path. On Stage 7 you can take the "Imperial" path instead, and then from there you can do the "Independent" and "Chaos" paths. There are also different paths within these major paths, although I don't know how much the story actually changes or how different the maps are. There are a total of 78 stages plus 3 hidden secret stages. 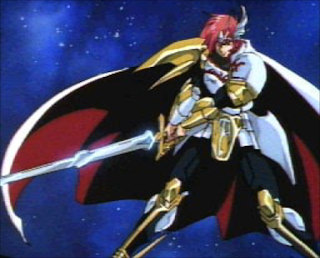 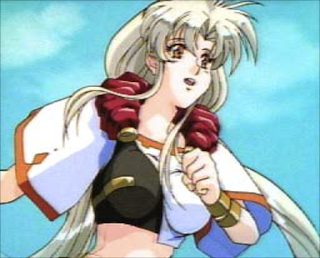 I have to give this game a lot of credit for they way they implemented the multiple paths. Having different paths is not a new concept -- Super Robot Wars 3 did it in 1993, and Tactics Ogre had major route splits as well. But often the route splits in games don't actually modify the story or make big changes, they just take a different path to the same outcome or show you different things that are happening at the same time. Tactics Ogre went somewhat beyond this, although in the end the story does end up in the same place. But Der Langrisser actually lets you join opposing factions; if you pick the Imperial route you'll be fighting against all the people that were your allies in L2 (or the light path). The Independent path puts you against everyone, and I think the "Chaos" path allies you with the demon enemies. 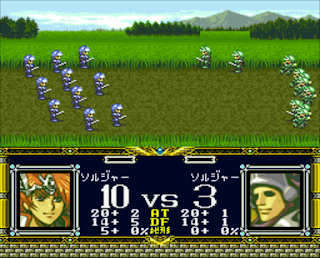 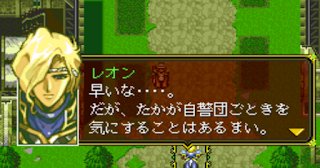 The overall game is a bit shorter, and easier, than L2, and there are some gameplay changes (like you can no longer buy multiple types of units for one commander). I'm not sure what the full differences are, though.

There seem to be no gameplay changes from Der to Der FX except for the addition of one extra secret scenario that I can't find much information on. The graphics were redone (with new face portraits) and perhaps 50% of the dialogue is voiced. There are also some FMV animated sequences added. If you can understand Japanese this is probably a better way to play Der than the original SFC version (although maybe the Saturn or PSX ones are even better). 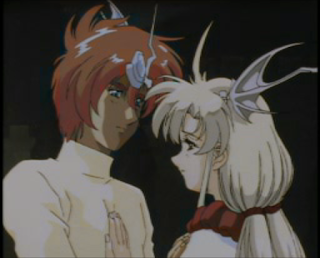 I'm going to do the Imperial route this time. I had initially planned to do the Imperial->Independent but the first stage of the Independent path is pretty hard if you haven't focused your XP on Hein, Elwin, and Rohga. I may do this path when I reach Langrisser Dramatic Edition for the Saturn in 1998.

The first 6 stages are basically the first 12 stages of Langrisser II, compressed a bit and with a new character Rouga (and I think there's a new character on the Imperial side as well). Stage 7 is new, with a character who is Rouga's sister but seems to be attacking us. This is where you get the choice -- Leon offers to let you join the Empire. If you pick no, then you're on the Langrisser II path, otherwise you can do the other 3 paths. So I picked no. 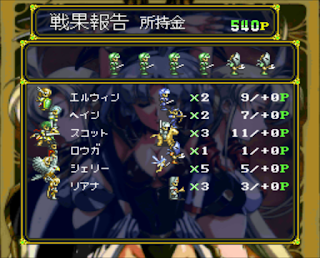 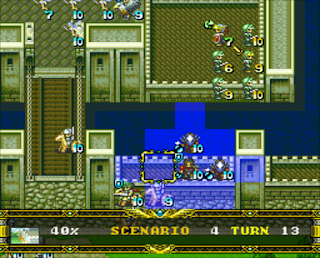 It was strange after playing L2 to see Elwin ditch everyone and go over to the Imperial side (although Hein and Rouga follow). Here's where I'll start doing stage by stage coverage.

This is the same bridge map that was in Langrisser II, although this time Keith and others are trying to block your progress. The fliers are problematic and the Angel Knights seem to be much better against bows than they should be. The pixies go down easily but the knights don't. In any case Elwin's pikemen were able to hold off the horsemen while I dealt with the flying units, and then once they were gone it was easy to break through and take out the rest of the troops.

Vargas joins here. I guess one thing good about this route is that he will get to see his child grow up? We'll see how it concludes. 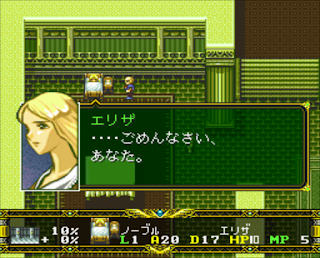 This is another bridge crossing level, with Aaron as the enemy.

This is a lot like the L2 stage where you're trying to reach the Langrisser before Leon does, but here you need either Leon or Elwin to grab it before Jessica can make it there. I decided to just ignore the enemies and go for the Langrisser as quickly as I could, and let Laird take out most of the enemies.

This is where you can decide not to give the Langrisser to the Empire, which sends you on the "you vs. everyone" path. I tried this the first time but it leaves you with only Rohga, Hein, and Elwin. My Rohga was very underlevelled; I probably could have soldiered through but I decided just to continue on in the Imperial route. 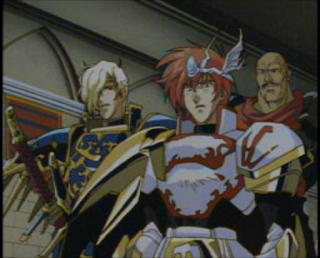 Now we have the Langrisser, which I gave to Elwin (Leon can also equip it, I'll shift it to him later when we get the Alhazard.

This is where the Imperial route starts getting really serious. I have to give Masaya credit for not pulling their punches at all in setting up the routes. Through the rest of the game you will end up killing all of the heroes from the Light side, and they all have sad death scenes (voiced in FX, of course). Here, we surround Loren's villa and slaughter his entire troop, including him and Scott. They try to escape but you lose if any of them do, so you're forced to kill them all to make sure they don't alert others. This requires good units on the top of the map -- I put Elwin up there with pikemen to make sure I could deal with Scott when he eventually began to run. Some horsemen appear and go up the sides of the map around the villa, but they move slowly enough through the water that they're not a big threat.

I also found that this period and the next 3-4 stages was the hardest part of the game. As with both L1 and L2, once people start getting their 4th/5th classes the game becomes significantly easier. But here the enemies were getting harder but I still did not have the advanced classes yet.

This is Aaron's death scenario. I split my group into two, sending Elwin with his pikemen up to the top bridge. The harpies continue to be very annoying even with my bowmen and ballistae; often I end up just killing the leader of these units so I don't have to deal with them. 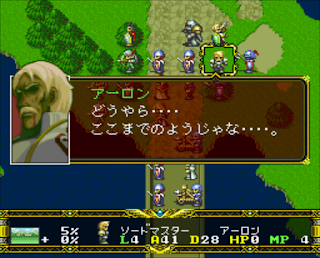 Now we have to capture Riana. Having Egbert as a companion is weird; the rest of them seem fine but he just always seems evil no matter what we're trying to do. But here we need Riana to be able to unlock the true power of both the Langrisser and the other sword. The main issue here is that once Jessica realizes what's going on, Riana will start fleeing to the right side of the map so you have to have enough troops to block her long enough for Egbert to get up there. I think I actually just ended up killing everyone (except Riana herself, of course) which also ends the stage.

Hein has meteor now, and the enemies are getting it too. I really don't like L2/Der's Meteor -- it seems unbalanced to me with its massive range and area. Although I suppose in general the enemies seem to get more use out of it than I do so maybe the unbalance works out in their favor.

This is a pretty short stage -- Rohga moves up to make Sonia flee, and then it's just Bozel left. I didn't bother trying to kill everything. I didn't even hire troops for anyone but Leon, and just killed Bozel. Money becomes a problem from here on out because of how many generals I have; I usually hired just 4 troops per person.

After this you can chase Bozel or Jessica; I went after Bozel because it seemed more heroic. But presumably we'll be slaughtering Jessica too by the end of the game.

Rohga can convince Sonia to join here. She always was terrible for me and I never got any good use out of her; I think she just joins too late in the game at not a high enough rank.

This is a tough stage because of how many meteor users there are. I failed the first time; the key was to move all the front units back at the start to pull them out of the meteor range. Hein's ballista take out the wizards near the start of the map, and then I just advanced slowly, taking out the enemies as I went. 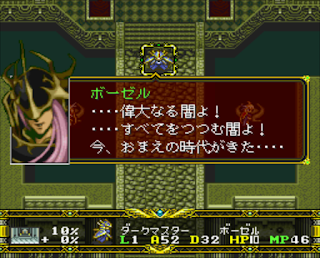 Another sad stage as Lester dies. This is a fast stage because Lester rushes you so you can take him out pretty quickly; I guess I could have farmed all the XP from the rest of the units but I decided to move on.

The sadness continues with Shelly dying here. By this time the game was pretty easy; Leon and Elwin were in their bonus classes and almost everyone else was in the last promote. 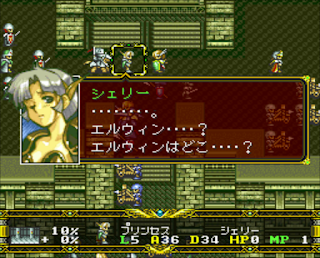 The death of Jessica. It's an odd stage because 5 of your units start all the way to the left and 3 near Jessica, Liana, and Lana. I tried to see if I could beat the game just by using the 3 on the right -- I picked Hein, Leon, and Elwin. I did it, but it took a lot of reloading. The three magic users can do a lot of damage and I was quickly left with just the commanders. Eventually I was able to heal Leon with Elwin, and then have Leon go up and kill Jessica with one hit.

Unfortunately the game froze during the ending, but I watched it on a youtube play. As I said before, I have to give the game credit for giving you the route option and then sticking with it. There's no attempt to make the Empire seem less bad than it is on the Light route. 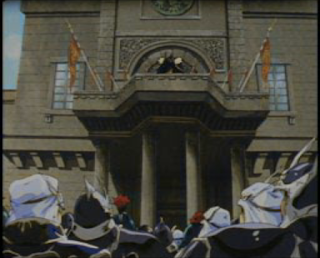 I very well may do the Independent/Dark route when I reach the Langrisser 2 remakes for either the PSX or the SAT; it will be a while before I get there.

I have a feeling there is no real need to play this version, though. If you can't understand Japanese you're better off playing the original game with the patch, and if you can read Japanese, I assume either the PSX or SAT versions of the game are better than this.