I finally finished the game; this took a long time. I found a similar pattern to other games I've played -- things that were initially minor irritations became major problems with the game. While overall I think this is a decent game for the time, there are three big issues with it.

The first is the pathfinding. I felt like I was constantly fighting with the AI to get the units to move to sensible places. Especially any map with a river bridge or narrow steps was a nightmare because the characters would often have a tough time finding it. Even if they did, if there's anyone on the bridge blocking their way, they immediately turn around and try to find a different way across. 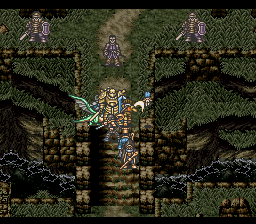 The second is the AI options available. They really need a "stay away from the enemies" option. Way too often the healers and magicians move right next to the enemies for no good reason. A "stay together" option would have been nice too.

The third problem is one that I also encountered in Hiouden, the only other RTS game I've played so far. Some of the later enemies can only be beaten by spamming moves, and it's hard to open the menu when you have spells and moves going off all over the board, each of which pauses the game and takes you to that unit. A lot of the later battles involve using moves and then hammering A to get the status screen up again so you can use the move again before the enemy heals itself or uses some nasty move. 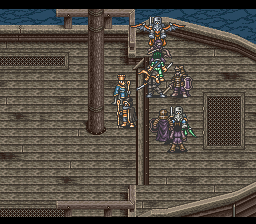 Coming into the third section of the game I was stopped for a while against one of the Machine Gods (one of 12). I did barely any damage to it and it healed itself. Eventually I watched a youtube video and follow their strategy -- I leveled up Mika the Ninja until she became a Ninja Master and could use Bunshin-giri, which is a powerful technique that I used on many bosses after this. 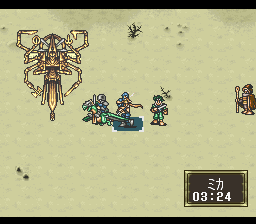 The story basically disappeared in the third section. Kurisu becomes the leader of the resistance group against the Empire for no clear reason, and every map is just clearing out more Empire forces. Eventually there's a bit more but it doesn't rise above RPG cliches, which was unfortunate given the promising beginning.

I wrote some about the "12 rings" you could find in the game -- I was under the impression these were optional items, but they are required to finish the game. Most of them are not hard to find; you just revisit areas after you finish them and they'll be there. 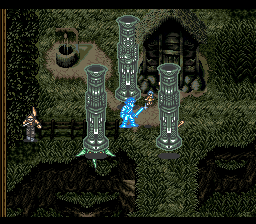 My final team was Faust the magician (pretty overpowered), Mika the Ninja Master, Kurisu, Roger the Dragon Knight, and Milandra the Bishop. Usually the battles involve keeping the team together, although trying to get the mage and priest away from the enemies. Kurisu, Roger, and Faust have good crowd control moves while Mika is useful for taking out bosses.

There was one stage I could not beat -- it had a wizard who cannot be hurt, but uses these incredibly powerful spells. I guess you have to beat everyone else to win the stage, but it's not a required stage so I just skipped it.

I think this game could have been a lot better. Unfortunately Double Edge is not well regarded, so it may not be much better than this. 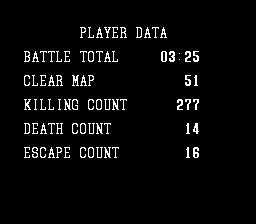 I think this means 3 hours and 25 minutes total for the battles, although that doesn't count the pausing.