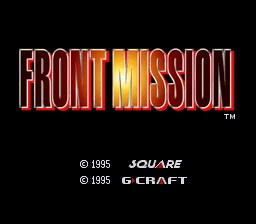 Once again I failed to do stage-by-stage updates, but since this game is easily available with a translation patch everyone can try it themselves. My main impression from this game is that I was expecting a lot out of it -- a Square game with big names involved in the development, and I felt like I had heard it hyped up. But I found it rather disappointing. It's not a bad game, but it has a lot of flaws. 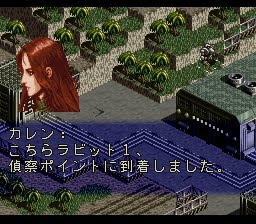 The story is fine for 1995. Here's the opening story from Wikipedia:

Set in 2090, the story of Front Mission takes place on Huffman Island, a fictional Pacific Ocean island roughly the size of Oahu, created by volcanic activity south of Mexico's west coast in 1995. In 2002, the land mass was classified as an island, and was ceded to United Nations control. However, in 2020, the United States of the New Continent (USN), a unification of North American and South American countries, made a bid for control of the island after withdrawing from the United Nations. The Oceania Cooperative Union (OCU), an alliance of the nations of South Asia, South East Asia and Australia that was created in 2025, dispute this claim when the two superpowers colonized the island in 2065. The tensions heat up and eventually lead to the 1st Huffman Conflict in 2070, with Huffman Island being divided into two halves at the end of the war. An uneasy peace is maintained until the Huffman Crisis in 2086, when a series of skirmishes across the island causes chaos. Tensions flare up and end in war when the OCU is blamed for inciting the Larcus Incident on June 3, 2090. 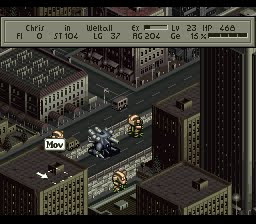 The main character can be named; his default name is "Roid" (Lloyd?) but I went with Kurisu. The game opens with the final sentence in the above description -- Kurisu goes to investigate a munitions plant along with his fiancee Karen. A USN dude named Driscoll kills Karen and blows up the plant, setting off the war. Kurisu is blamed for the war, chased out of the military, and turns to fighting in coliseums for money. But he's recruited into a special mercenary force in the OCU. The first part of the story involves the war against USN, but this evolves into a more complex plot later. 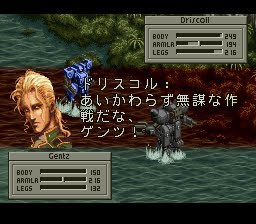 There are a number of people you get on your team. Most of them are just there, with a bit of backstory, but a few of them have deeper involvement in the plot. Of the antagonists, only Driscoll really gets that much development. 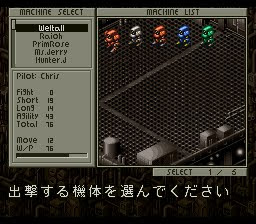 I believe this is the first SRPG to have height, although it was not always clear to me what difference it makes. I think it affects the range of long attacks, and you can't use fight/short attacks if there's too great a height difference. 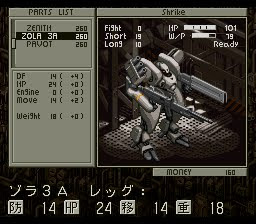 Each mech has four areas of damage -- the body, right and left arm, and legs. When you make an attack you harm one or more of those areas randomly (I think). Destroying arms removes that weapon, destroying legs lowers the movement, and destroying the body kills the mech. Although this sounds interesting, in practice I found that when attacking enemies it didn't make much of a strategic difference. Once you get the Duel ability (which lets you target a part), it seemed like it was pretty much always a good idea to target the body. Maybe I could have done better taking out some of the weapons first if I couldn't kill the mech in one turn, but the game was never challenging enough for that to matter. 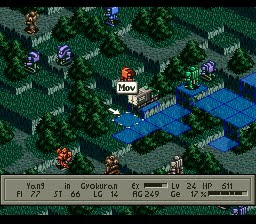 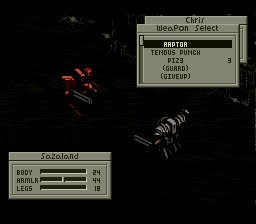 There is a lot of customization you can do with your mechs -- 4 body parts and 4 equippable weapon areas. Unfortunately the game doesn't really give you a good reason to think about the process much. You basically just buy the strongest stuff for everyone. Some people excel more at Short, Long, or Fight, but that only produces minor variation in the overall setup. It becomes tedious to upgrade everyone's mechs at a new town. 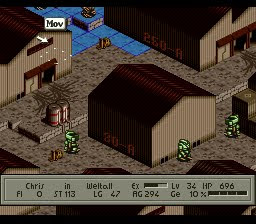 The Short, Long, Fight distinction helps each character learn skills. I wish they would give you a better idea of when you might learn skills; it seems like just a random chance when you move up a level. There's also a huge difference in difficulty with these skills. I found the game quite challenging in the early stages, and it's even more challenging if you don't have a good idea of how to set everyone up. But once you start getting characters who can do a double attack targeting the mech body, you can kill most things in one attack and the game becomes significantly easier. Even the bosses can barely stand up to a few characters with good skills. The final boss can be defeated by ranged attacks outside of his own range, which is a surprising development oversight. 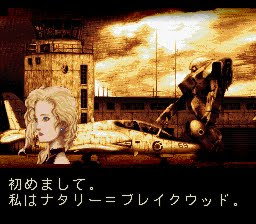 There also is not enough variation in the enemies you fight. They have some different weapons, but they all basically look like the same mech. This paired with the balance problems I mentioned earlier meant that I was hardly ever looking at enemies and saying "Oh, I'll need to use this particular strategy to fight those guys."

The graphics are a high point for the game. Yoshitaka Amano's art is used more or less directly in the game, and gives the game a certain atmosphere that is different from the usual "anime kids against the world" motif. The mechs look decent in the battle sequences, and the attacks are fast-paced and you can see what's happening. 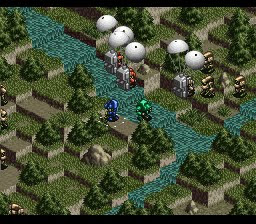 This all seems pretty critical, and I guess it is, but the game is OK. I'll be interested to see if Front Mission II takes the good ideas FM1 has and improves on them.
at May 17, 2020