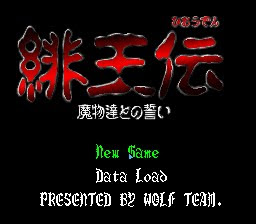 I originally didn't have this game on my list, but when I was evaluating it to see if it was an RPG (for my other blog), I realized it was actually an SRPG I had missed. It's by Wolf Team, which later will develop the early Tales games. It has music by Motoi Sakuraba, who had been working with Wolf Team for a while.

Hiouden is a series that began on the PC-98; three games were released from 1992-1994. This Super Famicom game is not a straight port of any of the PC-98 games, although it follows the same basic story idea. A wicked minister has betrayed the king, and his son escapes, but then turns back with summoned monsters to have revenge on the minister. The title "Legend of the Scarlet King" seems to refer to the blood-drenched Prince who takes revenge via the monsters, although the narrator tells you at the beginning this is not true.

The game supports the SNES mouse, and the controls are surprisingly well done -- it's hard for me to come up with places where I think they made bad decisions within the limitations of the Super Famicom.

So let's get right into it 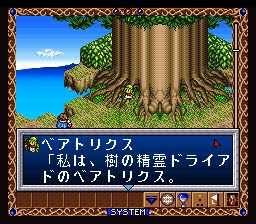 You start at the top of the castle, which connects to a garden. A dryad named Beatrix appears and gives Richard, the prince, a ring that lets him make contracts with ancient monsters that have been sealed within statues in the castle. This stage is basically a tutorial, that shows you how to move, open chests and doors, get monsters, equip things, fight, and such. 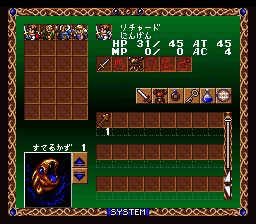 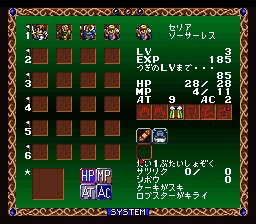 The battles happen automatically when your guys encounter the enemies. There's not much you do to directly control them; you can set an overall tactic to have them retreat, fight to the death, withdraw injured characters, or rest. You can change the order in which the magicians will prioritize their spells. By clicking on the hourglass in the bottom right you can pause the game which is very helpful; this allows you to use items and redirect your characters.

Every squad you defeat gives a chest, which has food and other HP restoring items, and equipment.

The stage ends when you reach the stairs down to the next floor. The whole game seems to take place within this castle.

You have three minutes to cross the bridge. There's a healing floor at the beginning to go back to, but I didn't find this necessary. I used one or two healing items and was able to beat the stage. 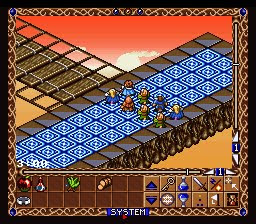 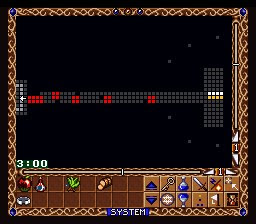 The map view is convenient because you can issue orders even there -- you can also split the screen between two parties, or between a party and the overhead map. 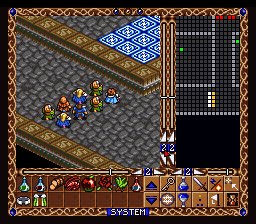 This stage has several corridors with arrows that shoot out. If you feed a statue some apples it will tell you that you need to leave one party on the switches to turn the arrows off while the other party fights the monsters. We also get the third group in this stage.

There aren't any healing floors here so you have to use the rest (click on the sword until it turns to ZZZ) to regain HP. We also find the Mattock here which can break down certain walls. 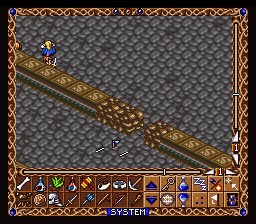 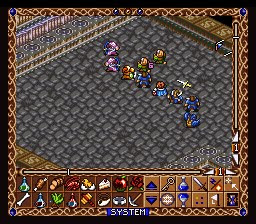 The stage ends with Richard and party opening a switch to release water, which washes them down right into the middle of a bunch of monsters including a large boss!

This is an all out fight right from the start, surrounded by a lot of enemies, so I'm not sure there's much you can do to strategize. The characters will blink red when they are low on HP. If you check their status screen it will show what food they like, and if you give them that it restores all their HP. I also have a bunch of magic items, but Nicovideo comments warned against using them early in the game because the later stages are so difficult. 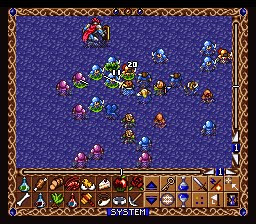 The manual has brief descriptions of the first 6 stages. It warns you here that you should keep the average level of your units high, I guess meaning that it's not going to work to just use one or two squads. So I used my weaker units entirely on this stage. 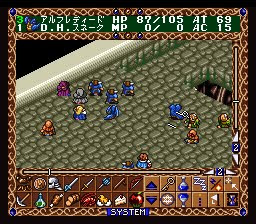 This is the stage where I started getting promotion items. They can change your characters' classes -- zombies into skeletons, serpents into dragons, etc. There are additional class promotions later on.

This is the stage where we take down the evil Minister. This requires going through a complicated set of doors that open with different keys, taking down reinforcement enemies, and finally taking on the Minister and a big group of enemies. I used my lower level guys and by the end of this pretty much everyone was in the 15-17 range. 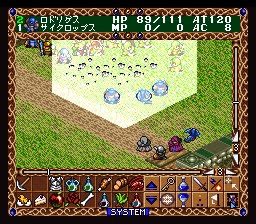 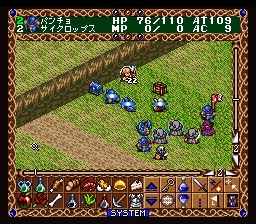 I should have made sure to get all those chests, but it shouldn't matter too much. The Minister tells us that he rebelled because Richard's father wasn't a good enough king, and that we need someone stronger to deal with the surrounding empires. Now that Richard can become the "king of monsters" maybe he can do it? Anyway, time to delve under the castle to find the Sword of Kings before Richard decides what to do.

There are only 20 stages in the game, so it's not especially long, but the stages could get longer as we go. So far I'm enjoying this game; I recommend giving it a try with the translation patch.