See the previous post's update for how I made it past where I was stuck. Lesson there: pay more attention to the dialogue.

This is a side mission, in a cave nearby the town to get Orlof's ultimate weapon (a bit early?) It has double the attack power of the iron swords everyone has now, and it's a spear. 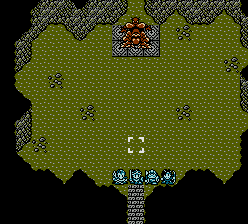 The boss there isn't very hard because you can put it to sleep. I found this out accidentally when I was trying to exit from Hans' magic menu and pressed the wrong button. I'll have to try sleep on other strong enemies -- once he was asleep I just cast a bunch of magic until he died. (Apparently elemental magic doesn't work, but I used the Gusachi spell which isn't elemental.)

This is another map where we need to split in teams and go off in different directions. 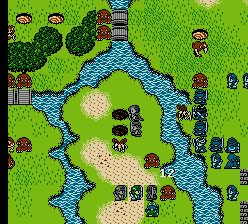 I sent Rolan to the middle, Orlof to the left, and Kurisu and Hans to the right. In retrospect I should have done it differently. Orlof's weapon is a lot better than I thought -- it hits all enemies adjacent to Orlof. Hans would have been better in the middle island because of all his archers. In any case it wasn't that hard.

The challenge of this map is that Kurisu, Rolan, and Orlof are sick. Randomly when you select their squad they might be paralyzed, which automatically ends their turn and then does auto for the rest of the troops. This means either that they get left behind, or that the troops run into disadvantageous positions to attack enemies (even the magic users will try to go hand to hand) and then get killed. This makes the mission incredibly annoying because so much randomness is involved. I had to retreat from the battle twice. Then it town it's annoying too because as you're trying to walk around, your character will randomly walk another direction or jump instead of moving. I understand the desire to vary the battles but this is not the way to do it.

It seemed to me like the key to winning is not to activate any of the monster lairs, although I wasn't sure that was possible. I know you can successfully complete a battle without sealing all the lairs, but maybe there are certain ones you can't. On my second try I figured out at least that if there are no enemies, but there is a lair in range that will produce enemies, you don't win. 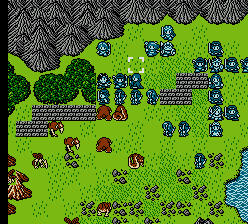 In the end I was not able to avoid the lairs, if it's even possible. The key was just to go fairly slow, and get somewhat lucky with the paralyze hits. You have to make sure not to let Hans get too far ahead or he'll get mobbed and die. Fortunately I can heal the paralyze in the next town.

Orlof ate double the poisoned meat so he's out. In fact, he won't return until almost the end of the game, so it makes more sense that they gave out his ultimate weapon so early.

I don't understand how the monster lairs work in this game. Sometimes they're active, sometimes they're not, and sometimes they will spit out one monster and then quit. There must be some sort of programming limitations involved that may introduce some luck or potential manipulation into the process. The second time I tried this map, I was able to seal 6 monster lairs without them ever sending out a monster, whereas the first time I tried it some of them were spitting out ghosts and hornets. I think it's because I activated the west monster lairs before I approached the other ones, but it's hard to tell. 3 shouldn't be the limit. 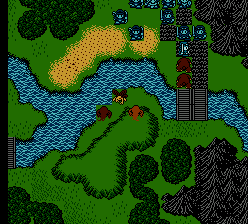 The most dangerous enemies here are the ghosts, which cast an instant death spell. If it hits your commander then the entire troop runs away. I ended up taking two squads down and one squad left, but this backfired when none of the lairs downwards brought out any monsters. Rolan was completely outclassed on the left side and was wiped out, but Kurisu was able to make it to the town and end the battle that way.

This is not a hard stage. The main annoyance is this NPC who yells at you as you move along, but the enemies don't attack him and there aren't that many enemies or lairs on the map. 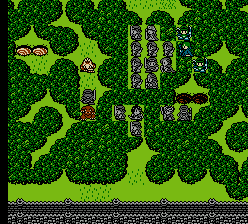 After this, you have to navigate through a maze cave which is annoying. 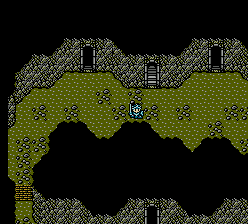 But then it's on to the next part. The name of the legendary god or kingdom or something that is related to the 7 Holy Stones is called ランブルビル. When I first saw that it looked to me like Rumble Bill and now I can't read it as anything else. So I will continue to look for the secret of Rumble Bill.
at March 18, 2019